In the middle of the nineteenth century, the issue of slavery divided the nation, eventually leading to the Civil War. The war was a devastating conflict that saw hundreds of thousands of casualties but ultimately affirmed that America would be a nation in which freedom would be assured for all. Explore the lives of enslaved people in antebellum America and the questions about slavery that divided the nation and led to Civil War. Carry your own haversack like a Civil War soldier and learn how families survived on the homefront. Explore the lives of Civil War leaders and the impact of Reconstruction. For your final project, create a museum exhibit or documentary film about the Civil War.

This unit can be used independently, but it is designed to be used concurrently with the literature unit for Bull Run. 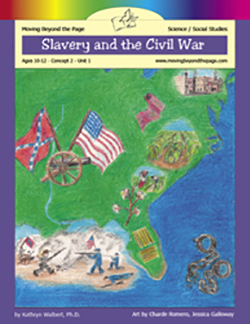