Inspired in part by his own childhood, this gorgeous picture book from Jim LaMarche, the beloved illustrator of A Story for Bear and The Elves and the Shoemaker, tells the story of one stubborn boy's unexpectedly wonderful summer on the river.

Nicky is convinced that his summer with his grandmother in the Wisconsin woods is going to be the worst summer ever. She cooks food that he doesn't like, there's an art studio where her living room should be, and he's expected to do chores—including fishing, the most boring chore ever.

But one afternoon, while Nicky is trying to catch their dinner, a raft drifts down the river towards him. The raft has a calming magic about it, affecting both Nicky and the wildlife of the river and woods. Through the raft and the adventures it brings him on, Nicky finds new common ground with his grandmother, a fellow river rat, who encourages him to explore his newfound talent for art. 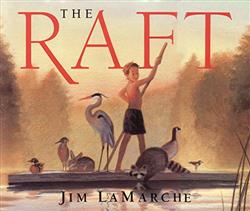