by The American Poetry and Literacy Project (editor)
$3.00

Rich treasury of verse from the 19th and 20th centuries, selected for popularity and literary quality, includes Poe's The Raven, Whitman's I Hear America Singing, as well as poems by Robert Frost, Langston Hughes, Emily Dickinson, T. S. Eliot, Marianne Moore, and many other notables. Includes 13 selections from the Common Core State Standards Initiative: Casey at the Bat, Fog, The New Colossus, Chicago, I, Too, Sing America, O Captain! My Captain!, Paul Revere's Ride, The Road Not Taken, The Raven, Because I Could Not Stop for Death, Mending Wall, The Love Song of J. Alfred Prufrock, and The River Merchant's Wife: A Letter. 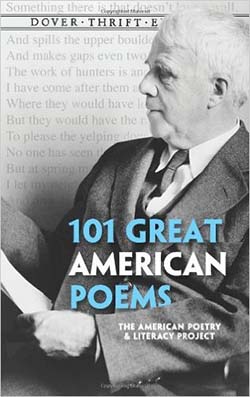