In this unit, you will learn about the years following World War II in the United States. Following World War II, the United States and the Soviet Union were involved in a military arms race in what was known as the Cold War. The Cold War also saw a rise in communism, a social and political system in which, theoretically, all resources of a nation are shared equitably. The 1950s and 1960s also involved the Civil Rights movements which saw the rise of famous protesters such as Rosa Parks and Dr. Martin Luther King, Jr., who lead non-violet protests in support of equality. The 1960s were a time of cultural explosion as America became known as a time of peaceful protest and rebellion against cultural norms. For your final project, you will create a time capsule that might tell future historians more about conflict and activism of the 1960s.

NOTE: The video series America: The Story of US is required for this unit and can be accessed online at various streaming sites. 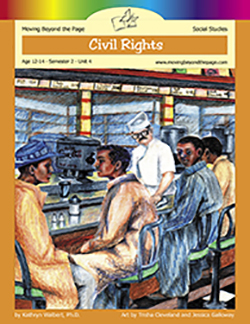