The Declaration of Independence and Other Great Documents of American History, 1775-1865

The great documents in this important collection helped form the foundation of American democratic government. Compelling, influential, and often inspirational, they range from Patrick Henry's dramatic "Give me liberty or give me death" speech at the start of the American Revolution to Abraham Lincoln's Second Inaugural Address, issued in the closing weeks of the Civil War. Also included are the Declaration of Independence, Thomas Jefferson's classic rationale for rejecting allegiance to the government of King George III; the Monroe Doctrine, the cornerstone of American foreign policy; and these other landmark statements: The Constitution of the United States; James Madison's The Federalist, No. 10; George Washington's First Inaugural Address and Farewell Address; Thomas Jefferson's First Inaugural Address; William Lloyd Garrison's Prospectus for The Liberator; Andrew Jackson's Veto of the Bank Bill; and Abraham Lincoln's First Inaugural Address, Emancipation Proclamation, and Gettysburg Address.

An introductory note precedes the text of each document, providing fascinating background history and information about the author. An indispensable reference for students, this handy compendium will also serve as an invaluable introduction for general readers to American political writing. 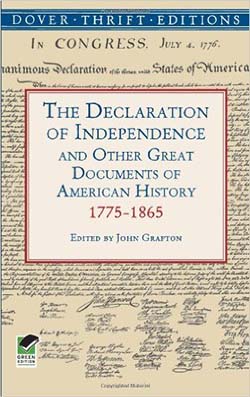 The Declaration of Independence and Other Great Documents of American History, 1775-1865

The Declaration of Independence and Other Great Documents of American History, 1775-1865
by John Grafton
$2.00
Please wait...