Your child will play the "Guess the Number" game at the following web link. There are 3 possible levels. Select "Medium," but feel free to adjust to ensure that he is both challenged and successful. Allow him to play several times and then ask him to explain his strategy for guessing the number. For example, you might ask, "How are you deciding what your first guess should be?" and "What do you think is the best way to narrow down the possible numbers?"
Web Link 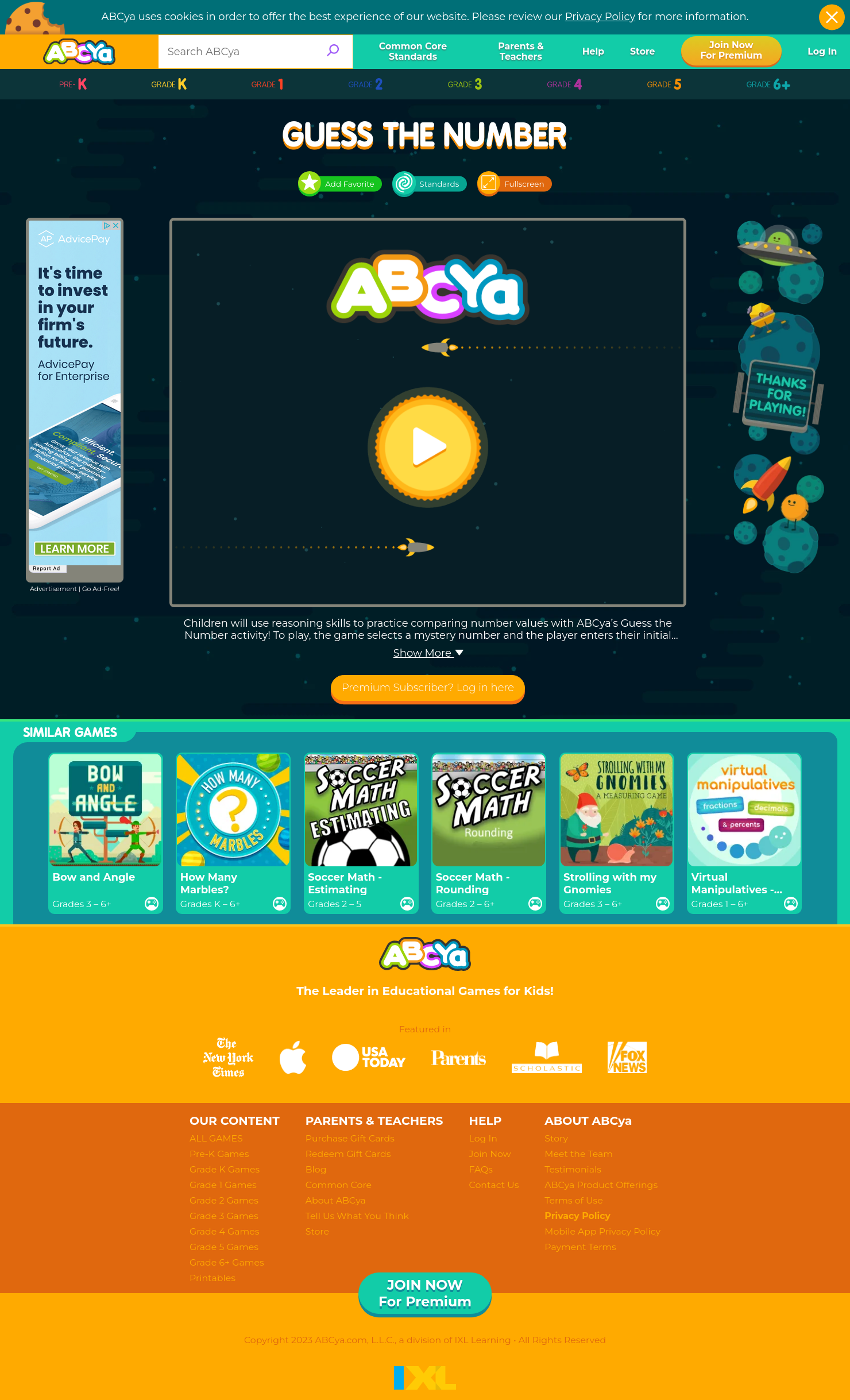 This game gives your child 7 chances to guess a number between 1 and 100 by providing hints about the number using "greater than" and "less than" as he makes guesses.

NOTE: The games on this site are free to play on computers (PCs/Macs) but require a paid subscription to play on mobile devices.

report problem
When your child is ready to stop the game, play "Guess My Number" with one another. Take turns thinking of a number between 1 and 100 and guessing what the number is by providing possible numbers and receiving clues. Like in the interactive game, provide clues using less than and greater than until the correct number is guessed. For example, if Player 1 is thinking of the number 56, Player 2 might start by guessing 20. Then, Player 1 should say "greater than that." Player 2 might then select 70, and Player 1 should say "less than that." Play continues with Player 2 guessing numbers based on Player 1's instructions until the correct number is guessed.

Materials: colored pencils or markers, computer keyboard, construction paper (kit), glue or glue stick, index cards (kit), Interactive Notebook, scissors
On the "Playing with the Language of Math" sheet, ask your child to write out in words "eight is greater than seven." Point out that writing it out that way took time and space. Pose the following: "I wonder if there might be a shorter way to write that eight is greater than seven?" Invite him to come up with shorter ways to write the same sentence on the sheet.

Look at a computer keyboard and ask your child to point to keys that might relate to math. Ask your child to explain his thinking while he points to different keys. Ask: What might these keys mean?

Show 8 > 7 on another index card. Ask: "What do you think this number sentence is saying?" (8 is greater than 7) "How do you know? How about this one?" Show 7 < 8 on another index card. (7 is less than 8) Place the index cards next to each other and ask your child to talk about the differences between the two number sentences. He might note that the numbers are in a different order and that the shape in between them is flipped.

While pointing to > and <, say: "These are both mathematical symbols. A symbol is something that stands for words. What words do you think > stands for? What do you think < stands for?" Be sure that your child knows that > means "greater than" and < means "less than." Ask him how we might remember this. Draw > on a sheet of paper and add teeth to it. Tell your child to pretend that it is an alligator that wants to eat as much as it can. It will want to eat the largest numbers it can, so the open mouth always points to the numbers that are greater. (You may want to point out the illustration of the alligator on the front of the Interactive Notebook.)

Using the "Math Symbols" sheet, your child will cut out, color, and glue > and < onto a piece of construction paper. Ask him to color each symbol with a green marker or colored pencil, leaving the teeth and eyes uncolored. Then he will cut and paste "greater than" and "less than" below the corresponding symbol. Ask him to write two number sentences that use > and < correctly at the bottom of the paper. He can store this paper in his Interactive Notebook for future use as needed.

Materials: newspaper: weather or sports section
Look at information about weather in a newspaper or watch for it on TV. Ask your child to create greater-than and less-than number sentences based on weather numbers. For example, looking at 2 cities in your state, which has the higher (greater) temperature? Your child could also explore numbers related to sports to create number sentences. For example, which of 2 football or baseball teams has the most wins? Which 2 teams have the same number of wins? How can we compare these numbers using the language of math?

Invite your child to act out a short news broadcast using signs on construction paper that show his number sentences. Model for him what a broadcast might sound like: "It was hot day today in many places in Texas. Temperatures in Dallas hit 90 degrees while Houston saw temperatures even higher than that with 94 degrees." Then, show a sign on construction paper that reads 94 > 90.
Please wait...