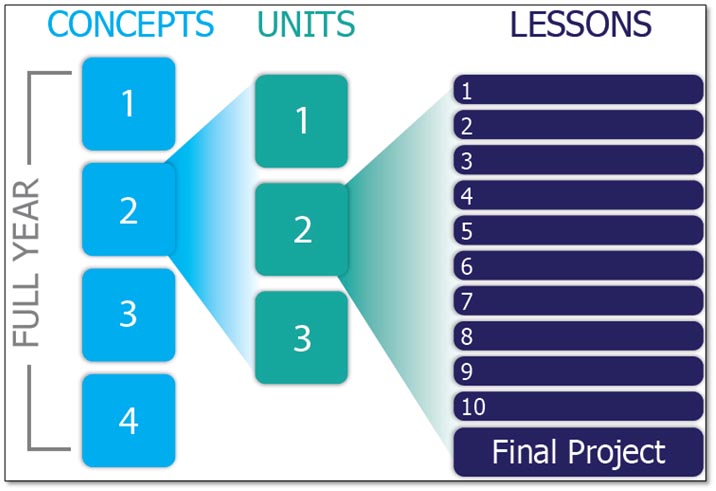 The Age 5-7 level of Moving Beyond the Page is structured around four 9-week concepts. Each of these concepts is made up of three 3-week units. Each unit contains about 10 lessons and a final project.

You only need to do one lesson each day. Start with the first unit of the first concept. When you finish it move on to the second. The full year of curriculum will be finished in about one school year.

Here is a list of the units in the order you will complete them along with the associated books.

Summary of Skills | Table of Contents
Unit 1: Habitats and Homes
Crinkleroot's Guide to Knowing Animal Habitats by Jim Arnosky
Me on the Map by Joan Sweeney
The Salamander Room by Anne Mazer
Up in the Garden and Down in the Dirt by Kate Messner

Unit 2: Weather
Crinkleroot's Guide to Knowing Animal Habitats by Jim Arnosky
Oh Say Can You Say What's the Weather Today? by Tish Rabe
Whatever the Weather by Karen Wallace

Unit 3: Community
Me on the Map by Joan Sweeney
On the Town by Judith Caseley

Summary of Skills | Table of Contents
Unit 1: Amazing Attributes
Over and Under the Pond by Kate Messner
Up in the Garden and Down in the Dirt by Kate Messner

Unit 2: Senses
My Five Senses by Aliki
The Magic School Bus Explores the Senses by Joanna Cole and Buce Degen

Unit 3: We're the Same, We're Different
A Life Like Mine: How Children Live Around the World by DK Publishing
Shapesville by Andy Mills and Becky Osborn

Unit 3: Patterns in Your World
Pattern by Henry Pluckrose

Unit 2: Characters Change
The Raft by Jim LaMarche
What Do You Do With a Problem? by Kobi Yamada

Unit 3: A First Look at History - Change Over Time
Telling Time: How to Tell Time on Digital and Analog Clocks by Jules Older
The House on Maple Street by Bonnie Pryor
The Usborne Time Traveler by Usborne Books

Unit 3: Addition and Subtraction to 10
Animals on Board by Stuart J. Murphy
If You Were a Minus Sign by Trisha Speed Shaskan

Unit 6: Time
It's About Time by Stuart J. Murphy
Telling Time: How To Tell Time on Digital and Analog Clocks by Jules Older